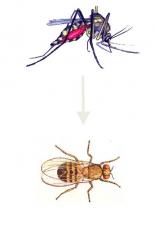 We have carried out a functional analysis of the Ors (Odorant receptors) of the mosquito Anopheles gambiae, which transmits malaria. Female Anopheles detects and locates humans largely through olfactory cues.  We have systematically expressed Anopheles odorant receptors in our in vivo expression system, the empty neuron system, and defined their functional response properties. Expression of the first  Anopheles odorant receptor, AgOR1, which is expressed in females, conferred response to the odorant 4-methyl phenol, a component of human sweat. We have now identified many compounds that excite or inhibit Anopheles odor receptors.  Some of these compounds may be useful in manipulating the mosquito olfactory system.  Since there are 500 million clinical cases of malaria each year, even a modest improvement in mosquito control could have a significant impact on an enormous global health problem.

Tsetse flies, which transmit trypanosomiasis, also detect their hosts in large part through chemosensory cues.  We are investigating the molecular basis of this detection process, in collaboration with Serap Aksoy, who maintains a tsetse colony at the Yale School of Public Health, and with collaborators in Kenya.